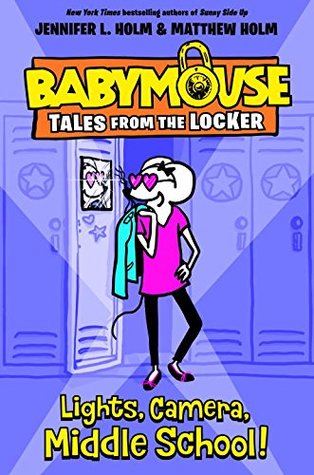 “Babymouse is back and sassieer than ever in her middle-grade debut, Babymouse Tales from the Locker: Lights, Camera, Middle School! Using Babymouse’s signature humor and engaging illustrations, sister and brother duo Jennifer and Matthew Holm are now introducing their beloved Babymouse to a new crop of readers sure to embrace the humor and heart of the new graphic novel series as younger readers have done for the original books.” From Random House Children’s Books

I’ve been waiting for a new Babymouse book. I never thought she would turn up as a middle schooler! Babymouse has to grow up? No, say it isn’t true! However, Babymouse has the same issues as before, but now in a larger scale. This time she is the director of a film for the film club, but of course, nothing works the way she envisioned. Laughs and problems only Babymouse could have will entertain fans from beginning to end. The novel/graphic format format will appeal to readers who love Babymouse but are also ready for a longer book.