We have a special treat today! A few weeks ago three of our former students stopped by to visit with their parents. They were here on vacation and were visiting their former teachers and friends in the Seattle area.

All of three students love to read! Lucily for them, I had just come from the American Library Association mid-winter meeting with numerous Advanced Reading Copies (ARCs) of books. ARCs are copies of books that people read and review and check for errors before they are officially published. Think of them as preview copies.

It’s always fun to have a new book that nobody else has yet, so all three students went home with some new books to read for the flight back to Denmark. Mathias not only read his book, he sent us a review for the blog too!

Here is Mathias’ review of House of Secrets by Chris Columbus and Ned Vizzini. It will be officially released on April 23, 2013. 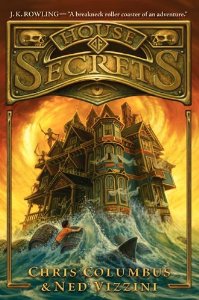 Setting: The story first takes place in Sea Cliff, San Francisco, then later in a mysterious world of adventure.

Characters: The Walker family is composed of five members.

Mr. and Mrs. Walker, were recently in a lawsuit because Mr. Walker, who is a doctor, had cut an eye into the back of his patient. They were sued by the family of the man, and used almost all their money to defend themselves.

Brendan Walker, the middle child, a computer geek and a quite smart kid. He is also very much into Lacrosse and his quick thinking saves them on several occasions.

Cordelia Walker is the oldest and smartest kid of the family. She is an avid reader and helped solve many of the problems the family were to face.

Eleanor Walker is the youngest and appears to be the most dumb. However she does show quite an appeal for helping and a very smart and quick brain, despite being dyslexic. She is also very much into horses.

Plot: A family of five are searching for a new house. Their real estate lady finds a nice house on the edge of Sea Cliff, a place known for it’s beautiful houses. At first the family is a bit worried that the house may not be as nice as the real estate lady says (their price range for houses is rather low) however they were all proved wrong. When they arrived it was a beautiful three story house, full of amazing furniture and stunning features that made the house almost seem too good to be true. This was made true when they heard the price. Their jaws dropped and they immediately decided to buy the house.

Soon after they bought the house strange things started happening. Brendan and Eleanor were seeing strange figures and shadows day after day. Brendan even thought that the statue which stood in the back had come alive and talked to him.

The next day something strange happened. First the old lady who says she lived next door comes by. Her name is Dahlia Kristoff, the relative of Denver Kristoff who used to live in this house. Brendan goes crazy on her, thinking she was the woman who had turned into the statue. After the old lady leaves the kids start doing some digging. Cordelia find out that according to a picture upstairs, she’s a 105 years old and missing a hand. Not long after the doorbell rings again. Thinking that the pizza has arrived, Mr. Walker goes over to the door and opens it. Outside stands Mrs. Dahlia again, and as soon as Mr. Walker opens the door, she steps in. Immediately she transforms. She is now bald and only a skeleton of herself. Her right hand is missing, just like Cordelia thought and she looked downright scary, especially with the brand new pair of skeletal wings that had just erupted from her back. Mrs. Walker started calling the police, but for a gust of wind that snatched up the phone and cracked it on a pedestal on the other side of the room. Then weird things start to happen. Dahlia Kristoff starts flying up, and every item currently in the vicinity start flying up. They form a vortex of flying items just zooming around the room. The two parents are knocked out by flying objects, but somehow the kids manage to stay conscious. Dahlia starts shouting about her long lost father’s (Denver Kristoff) reincarnation and suddenly everything goes black.

My Thoughts: I think this book is amazing. With all of the mystery happening in only the first instance of the story, it provides a great lead into the book. The book itself is astonishing. The idea of having an entire story based on the fusion of three books is downright fascinating. The different characters in this book are amazingly unique, in such ways that even you can’t see the events they’re going to make happen before they do. The things that happen from every angle, like betrayal, love and unexpected friendship just makes this book one of the best books I’ve ever read.

Thank you Mathias for this awesome book review! I can’t wait to buy a copy for the library in April when it comes out!

2 thoughts on “A Book Review from Denmark”